Chris Mathews claimed that President Obama was in an "enemy camp at West Point." Has Mathews forgotten that the President is the Comander-in-Chief of the armed forces and West Point is our nations oldest military academy. Or, has MSNBC finally suceeded from the union... or at least reality.
Posted by MajorG at 1:21 PM No comments:

Have the fighting men and women of America been screwed again by a politician pandering for votes? Or, is this the push needed to defeat Al Qaeda and the Taliban, and achieve Afghan self sufficiency in the war against terrorism?

After dithering for almost six months, the President has announced a troop "surge" in the Afghan theatre of 30,000 of the 40,000 requested by his commander on the ground. Is this enough to defeat the terrorists by the withdrawal deadline specified by the President; or, are we just sending more men and women in harm's way to create some political eyewash?

Is it wise to announce a withdrawal timetable? Does this send a signal to the Afghan government that they have to get their act together and take responsibility for their own future. Or, does it say to the terrorists, "You don't have to defeat us. Just avoid being defeated until the withdrawal date, then move in and take over."?

Or is this some tragic Obama-esque political theatre--play to the right with the troop surge, while playing to the left with the withdrawal timetable--while our young men and women die for an unsustainably weak military strategy?
Posted by MajorG at 1:06 PM 1 comment: 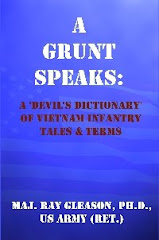 Autographed Copies Available from the Author! Write to gleasor@culver.org